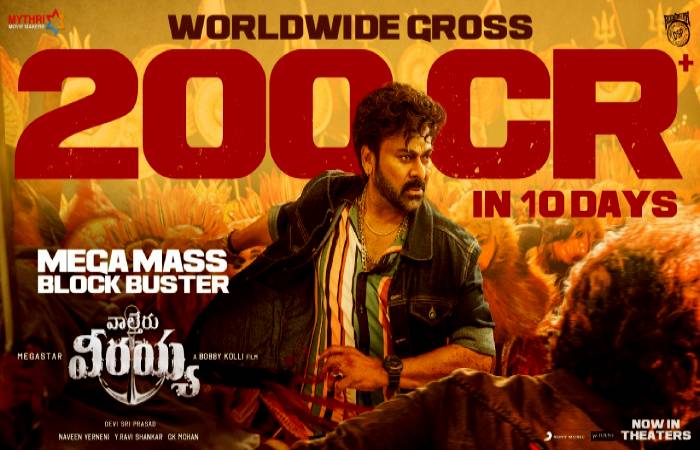 Mighty Megastar’s ‘Waltair Veerayya’ is unstoppable at the box office as the movie is only going strong with each passing day. The producers, Mythri Movie Makers released the latest collections poster, which is now shocking the trade pundits with stunning numbers.

Despite poor reviews, the movie Waltair Veerayya bagged positive word of mouth right from the first day of its release. Competing with his arch-rival ‘Veera Simha Reddy’, Chiru’s vintage performance made Waltair Veerayya a true Sankranthi winner by an amazing 100 crores of gross within its first weekend. Many thought that the movie would slow down after the end of its first week but the theaters are getting house fulls even on the 11th day of its release in all the A, B, and C centers without any difference.

The poster thrilled the mega fans as the matinee idol grossed 200 crores within ten days of its release worldwide showcasing the real stamina of Chiranjeevi. Being a straight Telugu story and Bobby’s presentation of his favorite childhood hero along with a team of core technicians who are hardcore fans of Chiranjeevi, the movie impressed everyone. Even overseas, the movie crossed the 2.35 million dollar mark and is inching toward the magical 2.5 million mark. Recently the megastar interacted with his fans overseas via zoom call and thanked all for their love. The producers are planning a huge success to thank the audiences for their unconditional love of Megastar and the movie.