Messi or Mbappe? Bars, pubs all set for grand finale 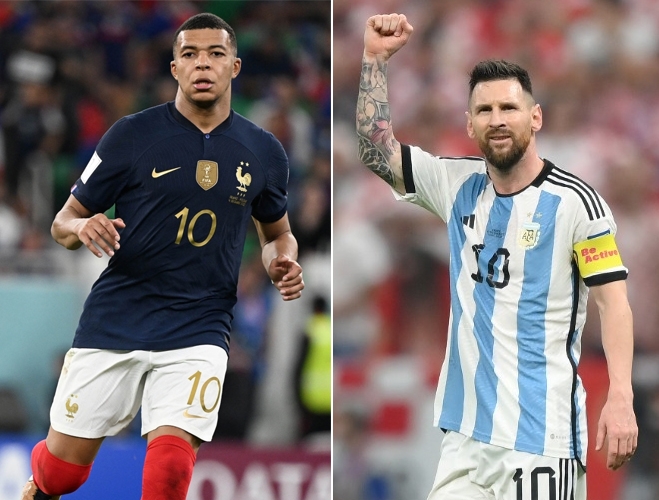 The big screens are set, the chairs are aligned and the beers are ready to flow as bars and pubs in Delhi-NCR and Mumbai gear up for the mother of clashes when Lionel Messi’s Argentina take on defending champions France in the final of the FIFA World Cup in Doha on Sunday night.

Football fever is all set to hit a crescendo on Sunday when people from across the globe will have their eyes glued to their television screens to see whether Messi has the last hurrah, or Kylian Mbappe spoils his swan song in World Cup by helping France become only the second country after Brazil to defend the coveted title.

Celebrities from different corners of the world have already reached Doha to be a part of history. The night will also see Shah Rukh Khan and Nora Fatehi participate in the closing ceremony.

The pubs in India are also decked up to make the most of the memorable night, as they prepare to welcome football fanatics with great fervour and stadium-like atmosphere.

Rahul Yadav and his team from Kasa Kai Mumbai, an event management company, are putting up big screens in Mumbai, Delhi, Gurugram, Kolkata, Chandigarh and Hyderabad, among many other places.

In Mumbai, they have put up screens at bars and pubs in as many as eight places, including at Kamala Mills, Andheri East, Khar and Borivali.

“This is what people want. They want to experience a stadium-like atmosphere. All the venues are sold out. It’s like an adrenaline rush as you get a stadium-like feeling sitting thousands of miles away,” he said.

In Gurugram, the newly-launched Orale Skybar has made special arrangements for football fans.

Hemant Nautiyal, owner of Orale Skybar, told IANS: “We are screening the match live on giant screens. We are also encouraging people to come wearing the jersey of their favourite team. The first drink will be on the house.”

Prathi Tandon, Owner of Effingut, a BrewPub, agrees that “sports brings everyone together to celebrate and enjoy”.

Tandon said: “Even when supporters of two teams come together, they engage with each other, be it in the same group or different groups coming to the outlet. We want people to enjoy and have a good experience.”

From beer on tap to ‘2+1’ offers for three whiskey brands, BrePub is all set to make the final special for its patrons.

Local in Noida and Junkyard Cafe in Connaught Place too are decked up to ensure that their patrons make the most of Super Sunday. Both the joints are decorating their interiors with team flags and miniature footballs.

They will also offer special deals on beer buckets with complimentary popcorn bowls.

“Football matches are a great way of bringing people together, which definitely gives much more visibility and mileage to our restaurants. Also, beer combos and great food make our venue a one-stop destination,” said Umang Tewari from Big Fish Ventures.

So where are you headed to?