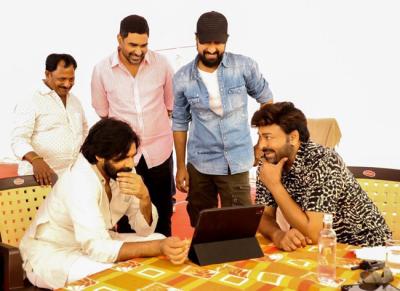 The power star Pawan Kalyan always makes the headlines with just his presence. Now a picture of his latest look is going viral across the internet, which is making the fans full happy.

Megastar Chiranjeevi’s ‘Waltair Veerayya’ movie is on the way to Sankranthi and to start its promotions, the team is releasing the most hyped single ‘Boss Party’ today at the evening time of 4. Before this, Powerstar Pawan Kalyan graced the sets of this song’s shoot and watched the song promo only to get excited immediately. Now more than the song, Pawan Kalyan’s looks are gaining more buzz as the actor looked uber stylish sporting black glasses and a well-groomed thick beard reminding us of his younger days. He was seen along with his beloved brother Chiranjeevi and director Bobby. Known for his style and charisma, Pawan can carry any look on him and even his normal Kurtha look was also smashing the internet. Needless to say, he is born stylish as the visionary director Rajamouli once expressed about this hero.

On the work front, Pawan Kalyan is wrapping up ‘Hari Hara Veera Mallu’ under the direction of Krish and this movie will be out next year’s Summer. Other than this, Pawan was buzzed to do a quick remake under director Sujeeth if his political plans allow this project to unfold.