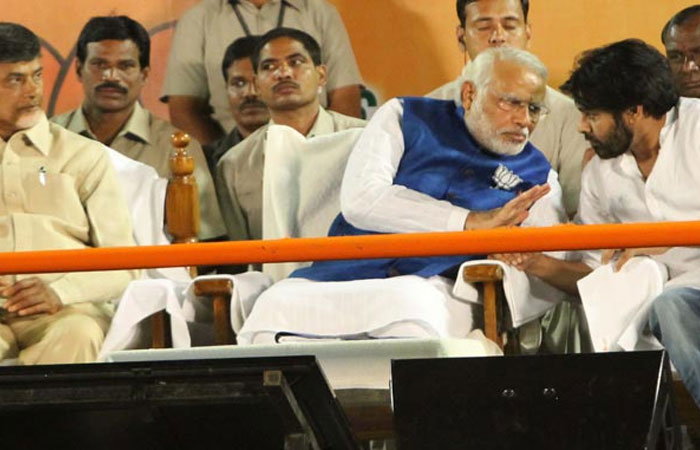 The politics of Andhra Pradesh have become interesting as the opposition parties TDP, Janasena, and BJp have started the alliance game. Amidst these situations, the AP-BJP head Somu Veerraju gave a shocking update regarding its future course of action and possible alliances.

It’s a known fact that these three parties contested together in the 2014 elections and won the ballet box but later they got split due to ideological differences. Janasena, however, continued its friendship with BJP. Still, TDP openly declared enmity with its former friend BJP during the 2014-2019 tenure of Chandrababu Naidu and since then, BJP was seen indirectly supporting the ruling party YSRCP. However the recent developments in Andhra with respect to Janasena and its Chief turned the entire focus on Pawan Kalyan and his friend BJP was nowhere seen supporting him on the flip side, TDP supreme CBN met and extended his support. This act brought back the possibility of a BJP-TDP-Janasena alliance yet again and the same was discussed in the meeting between Modi and Pawan Kalyan.

It seems Modi after returning to Delhi has made a decision regarding the possible joint ventures as its AP wing’s president Somu Veerraju claimed that the biggies have given the ultimatum. According to it, BJP in Delhi has decided to go with Janasena but not with TDP come what may for 2024’s general elections. Not stopping there, Somu revealed that the same was briefed to Pawan by Modi in Vizag’s meet and it will be a triangular contest among YSRCP, TDP, and BJP-Janasena in 2024.

Political lovers observing the ongoing trends and moods of Andhra and its main leaders say that Pawan Kalyan would rather team up with TDP than AP-BJP as the Janasenani was not interested in denting the anti-incumbency voting. Also, It was TDP that stood as a support but never BJP being his friend. Apart from this, BJP’s secret Nexus with YSRCP is also making Pawan not shake hands with the saffron party in Andhra Pradesh.